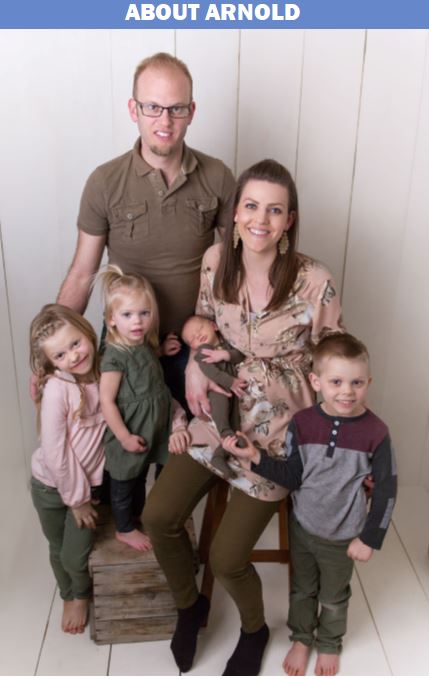 Arnold Viersen was born in Barrhead, Alberta and grew up nearby in the rural community of Neerlandia with his five siblings. An avid outdoorsman, Arnold enjoys hunting, fishing, and 4x4ing. His interest in small engines and automobiles led to his first job, washing cars at a local car dealership.

Following high school, Arnold apprenticed as an auto service technician and attained his journeyman ticket from the Northern Alberta Institute of Technology (NAIT). Arnold has also earned a business degree from the University of the Fraser Valley (UFV) while continuing his automotive career.

In 2010, Arnold married Melissa Bredenhof and they currently live in Westlock County, close to his childhood home in Neerlandia. Arnold and Melissa have four children Aliyah, Seeley, Jillian, and Daniel. As a family, they continue to enjoy the outdoors, adding snowmobiling, hiking, and gardening to their list of favourite activities. They are active in their local church and Arnold continues to be a member of the Barrhead Fish and Game Association.

In October 2015, Arnold Viersen was elected as the Conservative Member of Parliament for Peace River—Westlock. At 105,095 sq. km., the riding is one of the largest districts in Canada and represents one-third of Northern Alberta. Peace River – Westlock has a population of 108,095 and includes fourteen First Nations and three Metis Settlements. Arnold is honoured by the trust his constituents have given him and is committed to representing their voices in Ottawa.

As a member of the Official Opposition Arnold is passionate about advocating for the rights and concerns of rural families, farms and industries in Alberta and across Canada. Since 2015, MP Viersen has been a member of the Standing Committee on Indigenous and Northern Affairs.

Arnold has actively fought against online sexual violence and human trafficking. On March 8, 2016, Arnold introduced Motion M-47 that instructed the Health Committee to examine the public health effects of the ease of access and viewing of online violent and degrading sexually explicit material on children, women, and men. Working across party lines, Arnold gained the support of the Conservative, Liberal, NDP, Bloc and Green parties and on December 8, 2016, Motion M-47 was unanimously adopted by the House of Commons. During the spring of 2017, the Health Committee studied the topic of Motion M-47 and tabled a report in the House of Commons on June 9, 2017.

In 2018, Arnold launched the All-Party Parliamentary Group (APPG) to End Modern Slavery and Human Trafficking to unite Parliamentarians across political lines. He serves as one of the four co-chairs. The APPG regularly holds briefings for Parliamentarians and actively moves policies forward including the introduction of the Modern Slavery Act by APPG co-chair Senator Julie Miville-Dechene. Most recently, on February 16, 2021, the APPG secured the adoption of National Human Trafficking Awareness Day every February 22 by unanimous consent in the House of Commons.

Arnold has also introduced Private Member’s Bill C-463, Putting Victims First Act, on June 19, 2019. C-463 takes aim at human trafficking by changing the age of protection from 15 to include ages 16 and 17. The bill will also allow victims to more easily remove publication bans if they wish to share their story. Thirdly, it calls for reverse onus bail which puts the onus on the accused to prove they should be allowed out on bail. Although the bill died with the 2019 federal election, Arnold continues to advocate for the policies in it.